Bringing a Ship to Life – Details of Zanshin

Not since my very first book have I dedicated such a large amount of narration to the starship in the story as I did with Zanshin in Confidence Game.  I tried hard to make the ship as much of a character of the story as Anelace was in This Corner of the Universe.  It was a fun and interesting process.

It started out at DeviantArt.com.  I often go there to find inspiration and I’m continually amazed by the talented artists at that website.  Even more incredible is their generosity.

Freighter starships are relatively difficult to find.  Most of the art is consumed by actual warships so it took some searching to find something that I could build a story around.  Here were some of my favorites when I went searching.  The below work, by an artist named hunterkiller, immediately caught my eye.  It’s a great design and I love the cargo crane atop the hull: 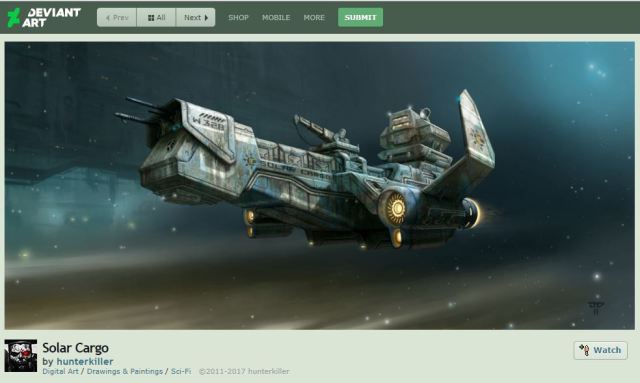 “Pelican” by Long-Pham is also another fantastic creation that really brings to life the wear and tear a vessel would endure over the decades: 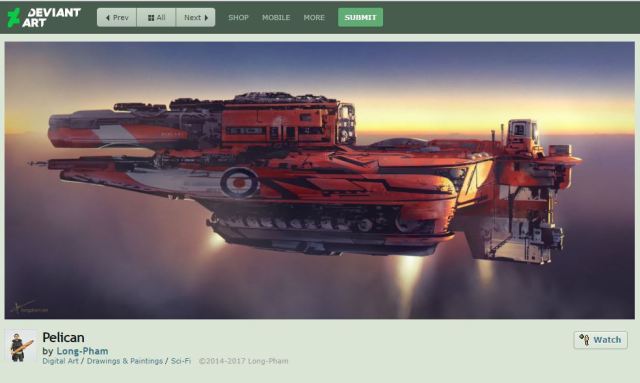 In the end, there was one more ship I fell in love with and I was incredibly lucky. Mike Doscher was generous enough to permit me to use his artwork to help bring Zanshin to life. I absolutely love the nautical appearance of this vessel and the cargo compartments fit perfectly with the narrative I was hoping to use in the story: 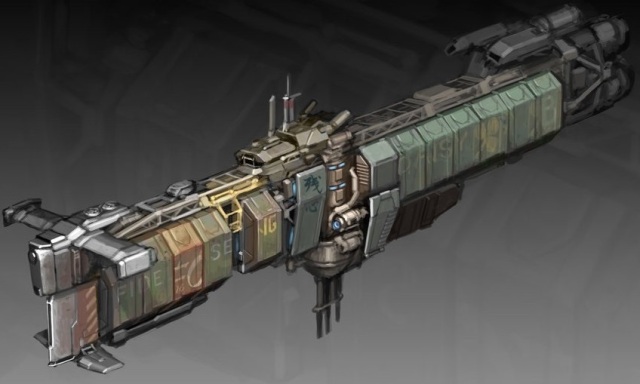 Of course, to make Zanshin come to life, I needed more than a fantastic picture. The Geography major in me needed a detailed deck plan. It started painfully: 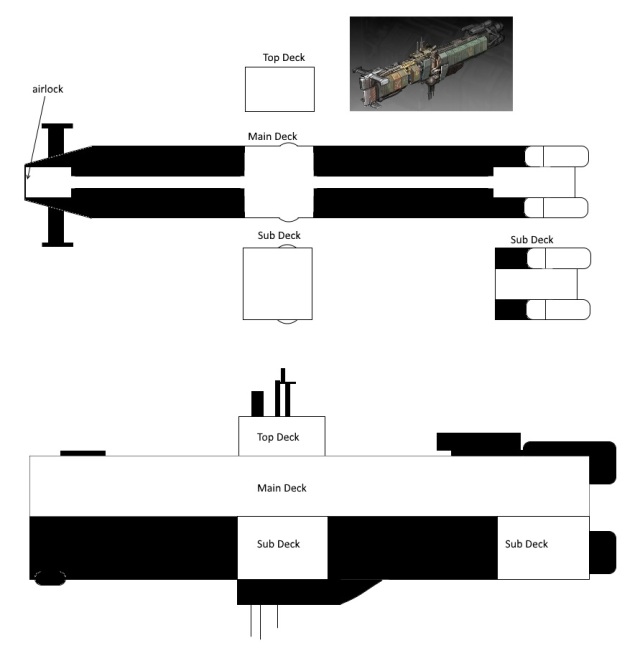 Stubby and fat, but you have to start somewhere.  I quickly added the picture to the top of my crude artwork as a guide but the only good thing about this opening deck plan was visualizing the three decks of the ship.  Only one deck, the “Main Deck,” would run its length.  I stretched out the ship and then added some graphics to flesh out some interior spaces next: 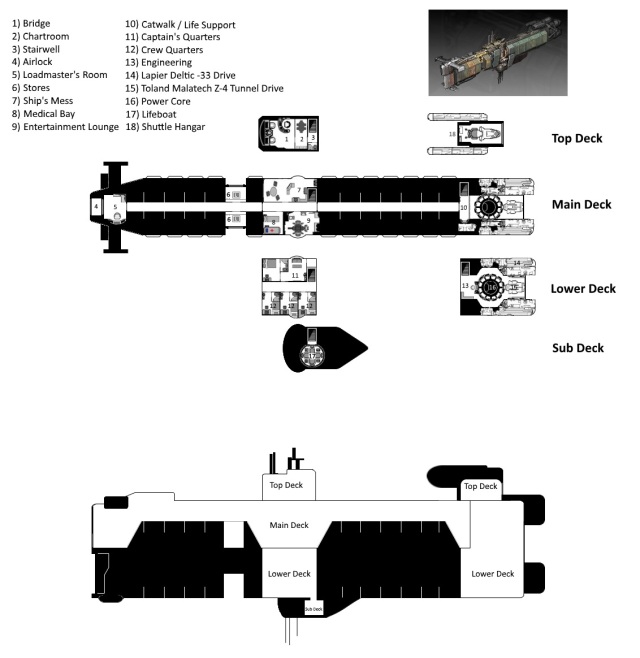 Now it was beginning to look, vaguely, like Zanshin.  I pushed up the forward and aft corridors to create the stairwells that feature prominently in the book.  Also, notice the forward holds are both internal holds and the distinct absence of internal holds after the common areas on the Main Deck.  However, the deck plan stayed amazingly consistent throughout the developmental process despite its early stage.  Estimates for the ship’s size and scaling came next: 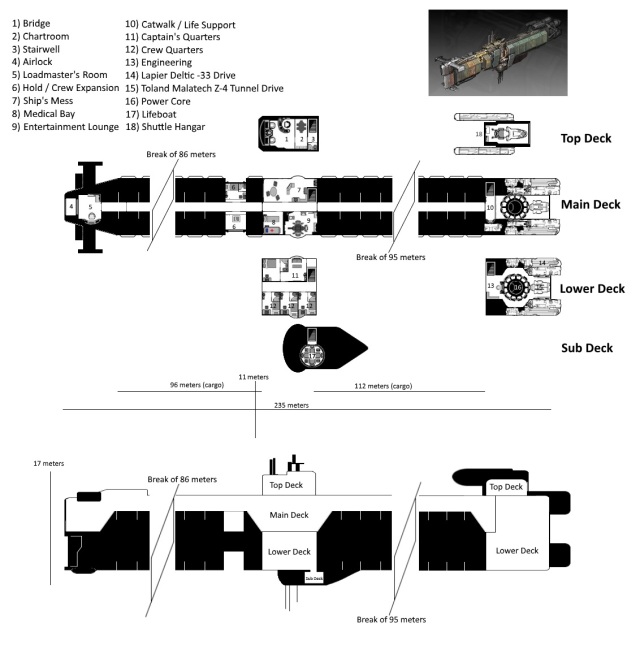 Zanshin still felt too “smooshed” though so I stretched it further to align more closely with Doscher’s artwork: 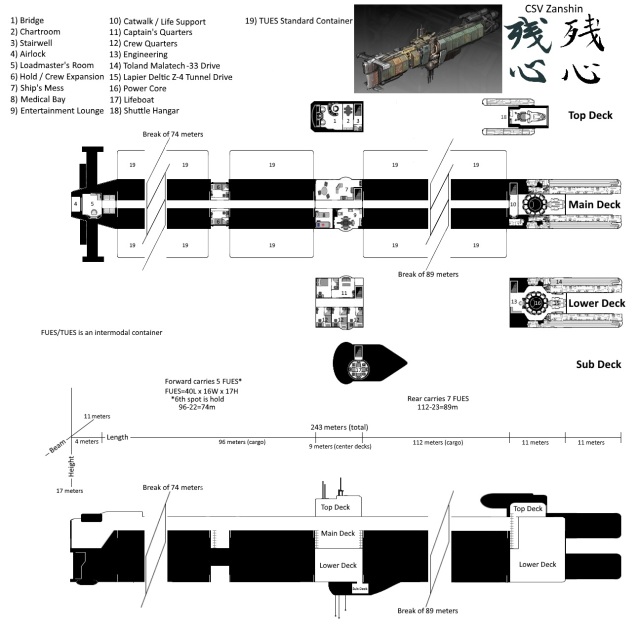 Now, I was getting somewhere.  In this iteration, one of the more major changes was the addition of the “Bonus Crew Compartment” converted from a forward internal hold that would serve sparingly as Mercer’s quarters. Next was nailing down the scaling of the vessel and figuring out compartment sizes, locations for key equipment and adding those rear internal holds: 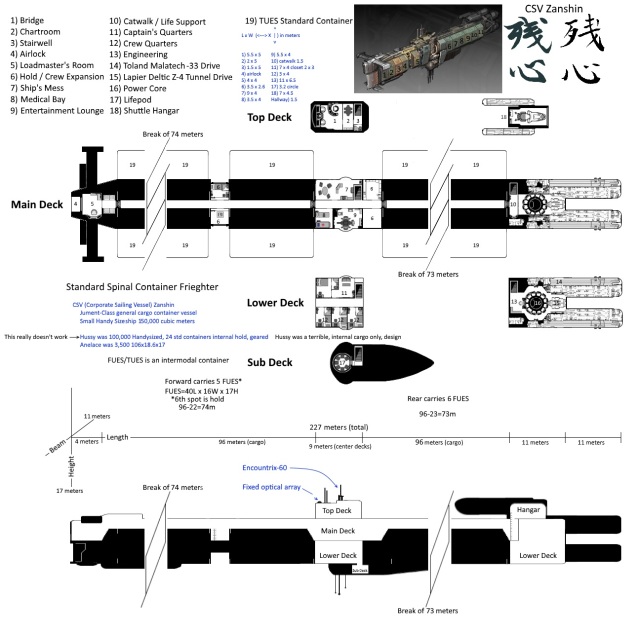 As you can see, there is actually quite a bit of information I hid from the finalized version used in the book, including the compartment dimensions and the note I made that Hussy (from Loyalty to the Cause) was giving me fits (I hate it when my universe isn’t consistent).  I picked and pecked at this design slightly but the changes after this were minor and finally yielded the version used for Confidence Game: 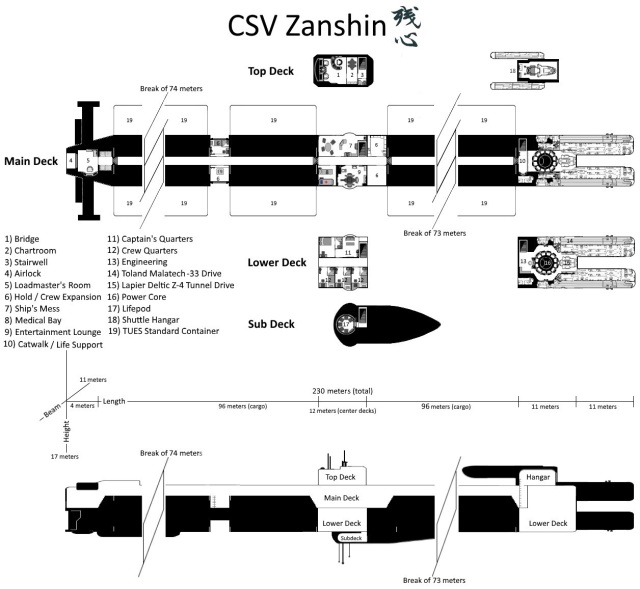 Creating such a detailed design wasn’t necessary but it sure helped with staying consistent and visualizing each compartment in my mind’s eye while I wrote.  Hopefully, this level of detail also enhanced your reading experience!