Back in November when I released Book 4, Loyalty to the Cause, I lowered Book 1’s ebook price to $0.99. I had intended to keep it there for a month or so, hoping to create a “no brainer” buying decision for science fiction fans who saw Book 4’s new release but hadn’t started the series yet.

I’ve been lazy about bringing This Corner of the Universe’s price back up, and now I’m just going to leave it where it is. It’s a pretty good book (as of this writing it has 91 reviews on Amazon.com and a 4.3 star rating), and I hope more folks stumble over it and become fans of the series, and the eventual spinoff series. There are a lot of stories to tell yet in Heskan’s universe!

Speaking of, progress on Book 5 is right where it should be. I’ve really become attached to the original crew of Anelace, as well as those they have crossed paths with on their journey. 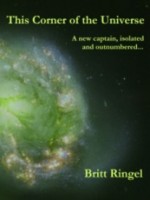 This entry was posted in Kindle, Nook and tagged ebook, scifi, This Corner of the Universe. Bookmark the permalink.
%d bloggers like this: