Update on the Next Book

When last you left me (or I left you), I was setting Across the Blue Line aside to let it ferment some and starting a different project. It’s a big departure from the Parasite invasion, humanity-hangs-in-the-balance nature of Across the Blue Line and fits instead into what I’ve taken to calling a “low stakes” book. Hopefully that doesn’t mean “boring.” I don’t think it does.

Since starting the project a month ago, I’ve written over 60,000 words. The characters have absolutely sprung to life and I’ve loved writing their story. When I started drawing a crude outline, I wasn’t even too sure where I was going but now, everything is completely dialed in. It may not have the far-reaching impact of an alien invasion but the main characters are certainly vested, and with a smaller cast I’ve been able to develop their personas in a deep fashion. So what’s this as yet untitled book all about?

The story takes place in the Coreward Corporate Zone, or CCZ. In my galaxy that’s the collection of corporations tucked between the Solarian Federation and the upper right corner of the Brevic Republic. It’s also the corporate zone I’ve least detailed in the other books. You know all about the Lesser Magellanic Arm and you’ve seen a little of the Central Systems in Loyalty to the Cause and Last Measure of Devotion, but the CCZ was little known by my readers. The only clue to the zone was the origin of Hussy’s old engineer. Of course, the new story doesn’t stay within the CCZ and it gave me a chance to not only deepen the Federation a little but also to fill out that region of the galaxy. All in all, it’s a great location for a story and a location that’s very different from the other books.

The timeframe of the story is 004. If you recall, Garrett Heskan took command of Anelace  in This Corner of the Universe in 995. The Republic began its ill-fated Parasite Initiative in 005. This means that all of the events of the TCOTU series have happened but we are less than a year away from Hero of the Republic when Caden Twist will take Pathfinder into Parasite space with the rest of the Brevic expeditionary fleet.

The subject matter of the new story revolves around a rather roguish freighter captain and his chief engineer. Both Reece and Mercer have interesting pasts that place them on a collision course. While the book is unnamed, I originally thought of this as “The Trader Series” although I’m not sure it’s a “series” …it might be just a one book and done. However, given the couple’s situation and how they’re overcoming the obstacle in front of them, the name has evolved to “The Scoundrel Series.” I’m very excited about this book and I think readers will have a great time with it as well. There’s even a pretty significant tie-in with my past TCOTU books that will tie up a loose end from Last Measure of Devotion.

In my last blog, I wasn’t sure if I would pick back up on Across the Blue Line or continue with the new book. I’m definitely finishing this new book first and I will be completing Across the Blue Line next year. I hope that isn’t too disappointing for some of you. Please believe me when I say that I want my readers to be happy and I just didn’t think I could maximize the story in Across the Blue Line this year. Now, I’ve got an extra year to make sure that book is worthy.

On a final note, I’ve already got the ship art lined up for the new book. Once again, I am humbled by the generosity of the artists at Deviant Art. Mike Doscher has been gracious enough to permit me to use one of his pieces that blew me away. It’s the PERFECT ship for this novel. If you’re interested in seeing some incredible sci-fi starship art, you should check him out at Deviant Art. Incidentally, Mr. Doscher’s art also inspired the layout of Hussy, the freighter from Loyalty to the Cause. Here is a sneak peek at Captain Reece Lochlain’s ship, CSV Zanshin. Be sure to look for this novel late Summer/Early Fall. 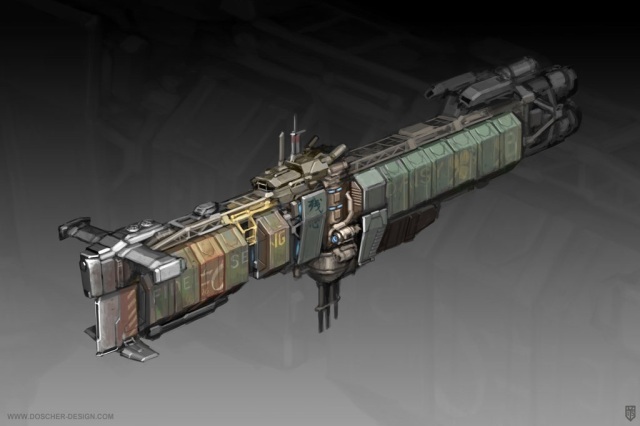