(Warning: This blog post is about scene inspiration in Hero of the Republic and contains spoilers!)

“After our fighter attack, the Hollaran main force shifted its course toward us.  We made a run toward the Cres tunnel point but distance and speed were against us.”  The admiral shook his head disgustedly.  “The Hollie bastards followed our own fighters home.”  Twist’s mind raced across military history.  That wouldn’t be the first time.

During the first battle at Kalyke, the Brevic fleet commander (Hayes) wisely keeps his heavy carrier out of the standard 20 light-minute detection radius of the Hollaran invasion fleet.  This simple maneuver keeps Hayes’ carrier relatively safe from Hollaran fighter attack.  After all, it’s hard to destroy a target if you can’t find it.

However, after launching an anti-ship fighter attack, the surviving Hollaran carriers launch their fighters with orders to simply follow the Brevic fighters back to their home carrier.  Even though the actual attack against the Brevic carrier (Avenger) is not described in the book, it is obviously successful as later in that battle, Caden Twist sees firsthand the horrible aftermath of the attacks.  (In Loyalty to the Cause, Garrett Heskan also sees the aftermath while in the New London star system as Avenger retires to a repair yard.)

In Hero of the Republic, most of the major fleet actions involving carriers have a distinctly World World Two, Pacific Theater vibe to them.  That’s certainly no accident.  As a history aficionado, I knew I wanted to have a heavy flavor of that period of our history.  Having written Avenger out of the war in LTTC, I always wanted to write the actual battle that knocked her from the war.  HOTR seemed to present my best chance to do so.  When devising that battle, I looked for opportunities to add an element of history.

In a sense, First Kalyke bears a tiny resemblance to the Battle of Midway.  In Sponde, the Commonwealth and Republic had recently fought one of the galaxy’s first fleet actions involving carriers (analogous to the Battle of the Coral Sea) and the next major carrier battle (like Midway) would involve multiple carriers and be an astounding success for the faction that lost in Sponde.

With that theme running through my head, I stumbled upon the idea of how the Hollarans would “find” Avenger.  The answer was obvious.  In the Battle of Midway, after a very successful American aviation strike that resulted in the sinking of three of the four Japanese carriers involved in the conflict, the sole, remaining operational Japanese carrier, Hiryū, quickly launched its aircraft for a counterattack.  At the time of launch, the Japanese had no precise location for the American carriers but the Japanese pilots simply followed the American strike craft returning to their home carriers.  The result would be a successful attack against USS Yorktown that would precipitate the eventual sinking of that ship. 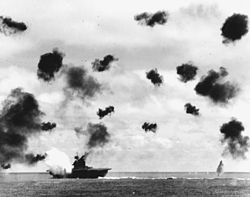 Yorktown at the moment of impact of a torpedo from a Nakajima B5N. Picture from Wikipedia.

I’ve included many other references or homages of past conflicts in my books.  Even the Type-88 Allison-Turner drives of the Brevic ships are a reference to a very famous military engine company with the number “88” a separate reference to one of the most devastating anti-aircraft/anti-tank weapons in World War Two.  It’s wonderful to be able to write in a genre where my love of history can play such a fun role.

This entry was posted in Author Notes, Military History and tagged battles, Hero of the Republic, Loyalty to the Cause, writing. Bookmark the permalink.
Loading Comments...
%d bloggers like this: