In No Way To Start A War, the Brevic Navy introduces its first dedicated carrier-based fighter, the F-3 Pup. The name, Pup, might be considered an unusual choice until you look at the history of the name and the Brevic Republic’s circumstances during the book.

Carrier aviation was nearly completely new to the Republic. I tried very hard to keep the theme of the “birth of aviation” prevalent throughout the story. Accidents in the book were very common, malfunctions even more common and just piloting and landing a fighter could be as dangerous as an actual combat sortie.

In keeping with this spirit, I chose very early on to name the Brevic fighter the “Pup” after the famous 1916 Sopwith Pup of World War I. While certainly not the first tractor biplane, it was certainly one of the first successful ones (for the Allies). 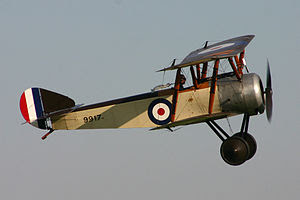 I considered naming the Hollaran fighters “Albatri” (another historical reference, for the opposing side) but that seemed a bit heavy-handed. The theme of the beginnings of aviation was also the reason why I had the pilot training bases located in the New London system. After all, where else could I place them? Finally, I tried to incorporate some of the old (archaic?) language such as “stunt” and “dud engine” into the dialogue to give that feel of history. I am thrilled that my readers picked up on that and didn’t ding me in reviews for using those expressions. But then again, sci-fi readers in general are kind of history buffs. I think we tend to look to the past when thinking about the future.

An update on Book 4: It’s slow going. However, I expect big things in July so hopefully I will stay on course for a Fall release.