Perhaps the most potentially confusing aspect of my books are the ranks people have.  There are three major political entities.  Each entity has different branches of military.  Traditions within each branch can create even more confusion.  Let me give you an example:

This sentence is correct despite Heskan being seemingly referred to by three ranks.  Heskan’s actual rank in this example (i.e., what he is paid at, O-4) is Lieutenant Commander.  The Brevic naval tradition of calling the commanding officer of a ship “captain” while he is on the ship allows for him to be called captain while on Kite.  Finally, with the lieutenant commander rank, it is often truncated to simply “commander” in conversation.

In the Air Force, lieutenant colonels (who were usually called colonel for short) were often referred to as “phone colonels” because they could technically refer to themselves as “Colonel So-and-so.”  All of the lieutenant colonels I worked for always said their whole rank over the phone to avoid confusion, much the same way I would refer to myself as Air Force Captain Ringel if talking to someone affiliated with the Navy (otherwise they might think I was an O-6 instead of a lowly O-3).

Add to this all the lieutenant, junior grades, full lieutenants and lieutenant commanders in No Way to Start a War and it can become a real nightmare for readers who aren’t versed in military ranks.

I have attached a picture of the navy ranks of the three major political entities in my series to hopefully help alleviate some of the potential confusion.  Bonus points for readers who know off the top of their head what Terran countries’ ranks I used. 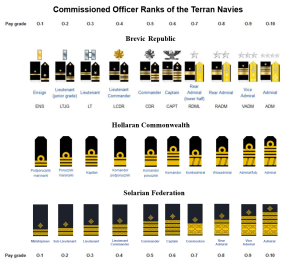